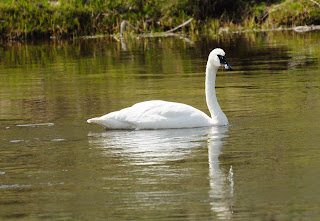 We went in the west entrance Saturday, May 15, along the Madison River, up to Norris and over to Canyon. A swan was in the river just west of the Bald Eagle Management Area, both coming and going. As usual, an eagle was near the nest, and we saw a blue heron in the river - harder to spot than the huge swan. Bison are very abundant in the western part of the park. Snow is still common around Canyon and to the north. So bison and elk are quite prevalent along the Madison and Gibbon Rivers where the snow is mostly melted.
Posted by Unknown at 10:00 AM No comments:

As of today (May 14) the south entrance is open for traffic to Grant, West Thumb, Fishing Bridge and Lake. More info at: